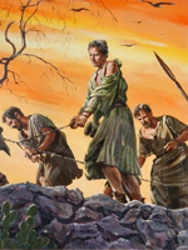 God’s purposes are always on time. Although His plans, at times, might seem delayed, they will be fulfilled at the precise moment He wills. The prophecies of the Bible reveal God’s grand design. Nations rise and fall on time. The Messiah, Jesus Christ, was born on time (Galatians 4:4). As we will study in our lesson today, God’s final judgment, which decides the destiny of the entire human race, will occur on time. In the great timetable of heaven, Christ will come again on time. Although no human being knows the day or hour of Christ’s coming (see Matthew 24:36), our loving, heavenly Father knows the time of His return (see Acts 1:7), and He will come again precisely on time.

This assurance gives us confidence. History is not composed of random occurrences. God stands behind all earthly events—even those which seem to make no sense at all—guiding all history to one glorious event, the second coming of Jesus Christ.

This does not mean that God actively causes despotic, ruthless, bloodthirsty, tyrannical rulers to kill millions. Never! It does mean that in spite of their horrible actions which are motivated by Satan himself, God is still in charge. Ultimately, His purpose will be accomplished. Finally, His plans will be complete.

Our lesson today is a graphic illustration that the purposes and plans of God know no haste or delay. What He does, He does on time. He is never late. This should give us great confidence.

1. How long did the prophet Jeremiah declare the Jews would be in captivity? Daniel 9:2.

As a student of prophecy, Daniel understood that according to Jeremiah’s prophecy, Israel would face seventy years of captivity. This period began in 606 B.C. when Nebuchadnezzar, king of Babylon, attacked Jerusalem. In the first year of Darius (539 B.C.) the captivity was coming to an end. Daniel longed for the deliverance of his people.

2. How did Daniel address God in his magnificent prayer? Daniel 9:4.

Answer: O Lord, great and awesome God, who keeps His covenant and mercy with those who love Him.

God is the keeper of the covenant—the One who is trustworthy. He fulfills His purposes.

Answer: We have sinned and been wicked.

5. As Daniel earnestly sought God for the deliverance of his people, who appeared in answer to his prayer? Daniel 9:21.

You will recall that, in our previous chapter, the angel Gabriel was commissioned to make Daniel “understand the vision” (Daniel 8:16). Unfortunately, Daniel fainted before a full explanation was made (verse 27). When chapter 8 ended, Gabriel had not accomplished his God-ordained mission. The portion of the vision applying to the time of the end (verse 17) was still a mystery to Daniel. Here, in chapter 9, Gabriel returns to answer the prayer Daniel prayed in the first part of chapter 9 and to explain the unexplained portion of chapter 8—the 2,300 days applying especially to the time of the end.

6. What specific instruction did the angel Gabriel give to Daniel? Daniel 9:23.

Answer: He instructed Daniel to consider the matter and understand the vision.

Daniel was instructed by Gabriel to “consider the matter” and “understand the vision.” We might ask, “What matter? What vision?” The answer is obvious. Gabriel is talking about the vision of the previous chapter that Daniel didn’t understand when the chapter ended—the vision of the 2,300 years. “What matter?” The cleansing of the sanctuary in earth’s final judgment at the end of time. Gabriel’s explanation does two things:

7. How long a period of probation or testing would God give Daniel’s people, the Jews? Daniel 9:24.

In the Hebrew language, the word “determined” means “cut off from.” The seventy weeks applying to Daniel’s people were “cut off from” the 2,300 days (or literal years), taking us down to the general time period known as the “time of the end.” 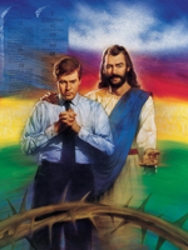 Answer: One day equals one year.

Answer: When the command to build and restore Jerusalem was given.

The entire prophecy begins with the commandment to restore and build Jerusalem. This decree was passed by the Persian king, Artaxerxes, in 457 B.C. You can read about it in Ezra 7:13-28. This decree, one of three decrees which allowed the nation of Israel to return from captivity to their homeland, is significant because it not only allowed them to take their possessions with them, it also gave them the right to worship, re-establishing Israel as a worshiping community.

The central theme of this prophecy is Jesus Christ. The prophecy carefully chronicles events in the life of Christ years before they happened. The word, “Messiah,” means “the anointed one.” Jesus was anointed with the Holy Ghost at His baptism (see Matthew 3:16; Acts 10:37, 38).

11. According to this prophecy, how many prophetic weeks would there be from the time the command was issued to restore and build Jerusalem until Messiah the Prince would come? Daniel 9:25.

NOTE: If we move forward on the time line 483 years from 457 A.D., we proceed to 27 A.D. (since there is no zero year). Precisely in 27 A.D., Jesus Christ was baptized and anointed with the Holy Spirit as the prophecy foretold (see Luke 3:21-22). Jesus is the Messiah. He is not a counterfeit. He came on time. He was baptized on time. And as we shall now see, He was crucified on time.

12. What event does Daniel’s prophecy predict would occur next? Daniel 9:26.

Answer: He predicts the Messiah will be cut off.

The Messiah, Jesus, was to be cut off or crucified. He was to be killed, but not for Himself. He died for us.

13. When does the Bible predict Christ would be crucified? Daniel 9:27.

Answer: In the middle of the week.

In the middle of the last prophetic week of our prophecy, Christ would be crucified. The sixty-nine prophetic weeks, or 483 years, came to an end in 27 A.D. One additional prophetic week, or seven additional years, brings us to 34 A.D. Since Artaxerxes’ decree was issued in the fall of 457 B.C., we now come to the fall of 34 A.D. 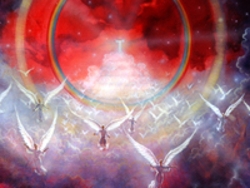 If Christ, the Messiah, was to be “cut off” or crucified in the middle of this last week—or half way through the last seven-year period—He must be crucified three and a half years from 27 A.D. The following chart helps to clarify the year.

Three and one-half years from the fall of 27 A.D. takes us precisely to the spring of 31 A.D. Daniel’s prophecy has been fulfilled exactly! Christ was crucified on time in the spring of the year on the exact day of the Passover. Jesus, our Passover, was crucified for us. He died for us. He shed His blood for us. He provided mercy and forgiveness for us. God’s mercy for the Jewish race lingered still. For three and a half more years, He appealed to His people. In the fall of 34 A.D., the apostle Stephen made his final appeal for the Jewish nation to repent. The Jewish leaders not only rejected the appeal, they stoned Stephen. At the death of Stephen, the gospel went to the Gentiles. Individual Jews can still be saved, but now God works through a new “Israel”—the Christian church. The church, the body of Christ, is also His bride. We are a chosen people, a royal priesthood of New Testament believers (1 Peter 2:9).

The first portion of our prophecy, the 490 years, applies to the first coming of Christ. It reveals a loving Saviour who came on time.

In 1844, God’s great prophetic time clock struck the hour. Since 1844, we have been living in the judgment hour. We are living at the end of time. The destiny of the entire human race is soon to be settled.

15. What solemn, awesome announcement does God make in Revelation 14:7?

Answer: The hour of judgment has come.

Answer: He will give everyone their reward.

Since Christ gives each person his or her reward when He comes (see Matthew 16:27, 28), there must be a judgment prior to His coming to determine what reward each person is to receive. This is the most exciting time in human history! Heaven’s final judgment is now in progress.

17. What gracious invitation does Jesus give us in these last hours of earth’s history? Revelation 22:17.

Answer: Come! Whoever desires, let him take that water of life freely.