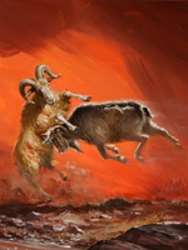 The prophecies of Daniel outline history in advance. They cover the same time periods from different perspectives; they go over the same ground again. In Daniel 7, God’s kingdom is under attack. Ruthless earthly rulers attempt to seize world dominion. A religious-political power—a strange combination of church and state—establishes its authority as supreme. God’s law, the foundation of His government, is changed by this new, would-be world leader. Human traditions are substituted for Bible truth. Church councils replace Scripture as the ultimate authority in religious matters. An earthly religious power seeks to establish the kingdom of God on earth based on its own grand design.

In Daniel 8, God makes His final move to set all things right. He takes charge. Truth, cast to the ground, is restored. In earnest, heart-felt prayer, God’s people confess their sins. They repent of their rebellion against His purposes. They are forgiven by His grace, transformed by His love, and renewed by His power. Kneeling before His heavenly throne, they seek Him. They surrender everything. The call of God’s final judgment inspires them to a deeper spiritual experience. The drumbeat of eternity motivates them to be ready. Heaven’s final appeal comes from the very throne of God in heaven’s most sacred place—the sanctuary.

The Vision of the Ram and the He-Goat: Questions 1-5

1. Daniel’s vision in chapter 8 is similar to which earlier vision the prophet received? Daniel 8:1.

Answer: The vision he had in Chapter 7.

2. What two symbolic animals does Daniel describe in chapter 8?

Both the ram and the he-goat were sanctuary animals. They were especially used in the services on the last day of the Jewish year—the Day of Atonement. These symbolic animals point forward to the final end of sin. They speak to us of a day when the universe will be clean and the human race will be at one with God again

The Medes and Persians ruled from 539 to 331 B.C. Under Cyrus the Great, the Persian Empire became the dominant of the two powers, fulfilling the prophecy that the higher of the ram’s two horns would come up last (see verse 3).

5. Who does the large horn between its eyes describe?Daniel 8:21

Answer: The first king of Greece.

Alexander the Great, the first king of Greece, aptly fits each detail of this prophecy. When he died at thirty-three years of age, his four generals divided the kingdom among themselves.

The Growth of the Little Horn: Questions 6-7

6. How does Daniel describe the he-goat power which succeeds Greece? Daniel 8:9.

This little-horn power grows in two directions. It moves geographically, attacking all armies in its path. This power grew exceedingly great toward the south, toward the east, and toward the glorious land (Palestine). Pagan Rome defeated Greece and rapidly expanded its empire throughout the Mediterranean region. Rome became the single most feared power in the world.

Yet the power described here is not content with merely a political empire. Rome’s political phase gives way to its religious phase. It reaches up to heaven itself to challenge the very government of God.

7. How high does the little-horn power attempt to exalt himself? Daniel 8:11.

Answer: He attempts to exalt himself as high as the Prince of the host.

“The Prince of the Host” is another name for Jesus Christ. This earthly religious power claims equality with the Lord of heaven Himself—the place of God’s sanctuary “was cast down.” Earthly priests substitute their authority for that of Jesus, our heavenly High Priest.

Answer: In heaven, in the presence of God.

Answer: How long will the truth about the sanctuary be trampled underfoot?

Answer: In 2,300 days the sanctuary will be cleansed.

In Scripture, a day means a day. But when the symbolic language of the prophecies of Daniel and Revelation are used, one prophetic day equals a literal year. Thus the 2,300 days are 2,300 literal years.

Answer: It refers to the time of the end.

The 2,300-year prophecy is the longest time prophecy in the Bible. It takes us down to the time of the end. We must wait until our next chapter, Daniel 9, to understand the real significance of this prophecy. In chapter 9, we will discover its beginning and ending points.

14. The Bible describes two sanctuaries-one on earth, built by Moses, and the other established in heaven by God. What specific instructions did God give Moses? Exodus 25:8.

Answer: To make Him a sanctuary so he could dwell among His people.

Everything about the earthly sanctuary represented Jesus.

Answer: To remove all sin from His kingdom.

God’s final goal is to purify or cleanse the universe from sin. Some individuals will be cleansed by fire. They cling to their sin. They fail to surrender their sin. Hardened in rebellion against God, they refuse to yield to His Lordship. In the presence of a Holy God, sin is combustible material. Our God is a consuming fire to sin wherever it is found (Hebrews 12:29). The fiery presence of God consumes sinners at the glorious brightness of His return.

In light of the fact that we are living in the final moments of earth’s history, would you like to respond to His gracious invitation to give your whole life to Him?