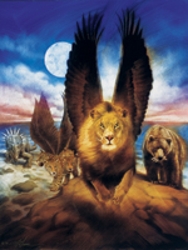 In Daniel 7, the prophet outlines the rise and fall of kingdoms. These kingdoms battle for world dominion. Armies fight for this earth’s throne. Potential leaders aspire to earthly greatness. Kings and emperors wage war. The stakes are high; the rulership of this world hangs in the balance. Finally, a religious-political superpower arises. This power demands the total allegiance of its subjects. God’s faithful people, who refuse to give this allegiance, are cruelly persecuted. The superpower changes God’s law, this power sets up its own standard of right. The destiny of the world trembles in the balance.

Then the scene switches from earth to heaven. The Almighty declares that He is the rightful ruler of all the world’s kingdoms. He pronounces judgment upon the would-be usurpers of the throne. The kingdoms of the world are His. He created our planet, and He redeemed it. “All peoples, nations, and languages” (Daniel 7:14, NKJV) serve and praise Him forever.

1. What scene does Daniel describe in his dream? What did he see? What did his vision contain? Daniel 7:1-3.

NOTE: Bible prophecy contains a variety of symbolic representations. Each of these symbols is explained clearly in Scripture.

Answer: a. A lion with eagle’s wings. b. A bear with three ribs in its mouth. c. A leopard with four heads and four wings. d. A very strong beast.

A lion, the first beast, is a fitting symbol of Babylon. The Old Testament prophets called Babylon a lion. A lion with eagle’s wings was a prominent symbol on Babylonian coins and on Babylon’s walls. The lion—the king of beasts—and an eagle—the chief of birds—aptly describes the powerful rule of Babylon from 605 to 539 B.C.

The fierceness of the Medo-Persian soldiers is depicted in the bear of verse 5. When the Medes and Persians overthrew Babylon, they also conquered Lydia and Egypt. The three ribs in the bear’s mouth represent these three nations—Babylon, Lydia, and Egypt. Medo-Persia ruled the Middle East from 539 to 331 B.C.

The leopard is an appropriate symbol of Alexander the Great’s empire, Greece. The Greek king conquered with the swiftness of a leopard flying with eagle’s wings. Why does this leopard have four heads? When Alexander died in a drunken stupor at age thirty-three, his four generals—Cassander, Lysimachus, Seleucus, and Ptolemy—divided up the empire. Bible prophecy is incredibly accurate. The Greeks ruled from 331 to 168 B.C.

The Roman empire, “as strong as iron,” conquered the world in 168 B.C. by defeating the Greeks at the Battle of Pynda. Under the Caesars, the mighty Roman Empire ruled from 168 B.C. to 351 A.D.

NOTE: The image of Daniel 2 contains four metals—gold, silver, brass, and iron. There are four beasts in chapter 7—a lion, bear, leopard, and a dragon. Just as the four metals represent the four successive world kingdoms beginning with Babylon in Daniel’s day and passing to Medo-Persia, Greece and Rome, so the four beasts represent the same four kingdoms. You might wonder why God uses metals in chapter 2 and beasts in chapter 7. In the symbolism of the metals in chapter 2, God illustrates that no power on earth can endure. The metals are transitory, but His kingdom—the rock cut out without hands—is permanent.

In the fierceness of the four beasts in Daniel 7, God describes the vicious conflicts of political kingdoms as they vie for world control. 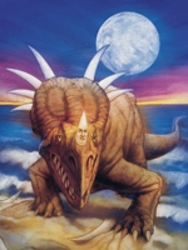 In Daniel 2, the iron legs, representing the Roman Empire, ended in ten toes, depicting the divisions of Rome. In Daniel 7, the fourth beast has ten horns, depicting the same ten divisions of Rome. Rome was not conquered by a fifth world power. It was divided—overrun by barbarian tribes from the north as it decayed from within from 351 to 476 A.D.

Answer: It came up among the other horns.

Since the little horn rose among the ten horns, it must rise in western Europe, out of the pagan Roman Empire.

6. Did the little horn rise before, or after, the division of the Roman Empire? Read Daniel 7:8.

If the little horn rose among the ten divisions of Rome, it had to rise after Rome was divided, or sometime after 476 A.D.

7. How did the prophet Daniel describe the eyes of this power? Daniel 7:8.

8. How did Daniel compare this little horn to the first ten horns? Daniel 7:24.

Answer: It was different from the first horns.

The divisions of Rome were predominantly political powers. This new power is different, therefore it must not be a political power. It must be a religious power.

9. What three characteristics of this power did Daniel describe in verse 25?

Answer: a. Speak pompous words against the Most High. b. Shall intend to change times and law.

This amazing prophecy predicts that a religious-political system would rise out of the old Roman Empire in the early centuries A.D. Based on human wisdom, church councils and man-made decrees, it would attempt to change the very law of God. The Bible predicted that the early church would enter into a period of apostasy.

Answer: He warned them that people would attempt to destroy the church of God.

Answer: When man exalts himself above God.

Answer: It would be cast to the ground.

Answer: For a time, times and half a time.

This period of a time, times, and half a time, is also mentioned in Revelation 12:14. According to Revelation 12:6, this time period equals 1,260 prophetic days.

Another way to calculate this period is this way.

In Bible prophecy, one prophetic day equals one literal year (see Numbers 14:34; Ezekiel 4:6). The little horn, or church-state power, would reign supreme for 1,260 years, or throughout the centuries of the Dark Ages. This Roman power—the Medieval church—would substitute human tradition for God’s Word, man’s law for God’s law, and penances and indulgences prescribed by the church for the forgiveness and repentance prescribed by God. Many faithful Christians, who refused to yield to this church-state union, would be persecuted.

Answer: God opens the books so everyone can see why He is the rightful ruler.

“Truth forever on the scaffold.
Wrong forever on the throne.
Yet that scaffold sways the future
and beyond the dim unknown,
standing still within the shadows
God keeps watch above His own.”

The kingdom of God opposed, oppressed, thwarted on every side, and attacked by the enemy will finally, fully, completely triumph.