Lesson 6 – Confidence in the Crisis 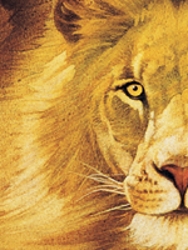 When our will conflicts with God’s will—and we choose His will instead of our own—our commitment to Him deepens. Christian character is developed when our faith is tested. God often allows us to experience temptations to enable us to grow.

Throughout his life, Daniel faced significant temptations. As he met these temptations through the power of God, his faith grew. The story of Daniel in the lions’ den is a familiar one, but it contains vital lessons of courage for end-time Christians.

Intrigue in the Palace: Questions 1-3

1. What influential position did Daniel have in the Medo-Persian Empire? Daniel 6:1-3.

Answer: He was chief over all the governors and satraps, second only to the king.

Daniel’s colleagues coveted his position. Their jealousy led to lying, and lying led to the willingness to murder Daniel.

2. What was the only area of Daniel’s life which these evil plotters thought they might use to trap him? Daniel 6:5.

Answer: In the area concerning the law of his God.

Jealous of Daniel’s position, these Medo-Persian statesmen resorted to a conspiracy of lies. Their greed led them to be willing to put Daniel to death. Cherished in the heart, sin puts down it’s roots and produces ugly fruit.

Answer: Whether or not he would worship God, even when the law forbade it.

Daniel’s final test revolved around the question of true and false worship. It centered in the counterfeit versus the genuine. 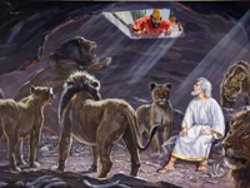 4. Although Daniel knew the decree was signed, how did he respond? Daniel 6:10.

Answer: He went home and prayed as his custom was three times a day.

Prayer was Daniel’s constant source of strength for maintaining an intimate relationship with God. It was vital. Prayer is the Christian’s lifeline to heaven.

5. When Daniel was cast into the lions’ den, what statement did Darius make, indicating he, too, had confidence in Daniel’s God? Daniel 6:16.

Answer: Your God whom you serve will continually deliver you.

Darius violated his own conscience; he knew that he was condemning an innocent man. Filled with guilt, he spent a restless, sleepless night in the palace. Unresolved guilt creates anxiety and dis-ease. The consciousness of doing right brings a sense of calm in the midst of life’s storms. Daniel was at peace in the lions’ den, while Darius was filled with stress in his palace.

Arriving at the lions’ den in the early-morning hours, the king discovered that Daniel had been miraculously delivered.

6. To whom did Daniel pay tribute for his deliverance? Daniel 6:22.

7. What provisions does God make for us during our times of greatest temptation? 1 Corinthians 10:13.

Answer: He won’t let us be tempted beyond what we are able to withstand.

8. How did Paul testify of God’s power to keep him faithful while he was imprisoned in Rome? Philippians 4:13.

Answer: He was able to do all things through Christ.

The devil’s power to overwhelm us is greater than our ability to resist. Left alone, we are powerless. But strengthened by God’s power, we will be victorious.

Answer: He described Him as living, steadfast and One whose dominion will last forever.

The word, “steadfast,” means “reliable,” “trustworthy,” “one who can be counted upon.” God never lets us down. When the lions of temptation roar in our ears, He is there to shut their mouths. When the evil one attempts to destroy us, He is there to deliver us.

The ultimate, final deliverance will occur at the second coming of Christ.

10. How does the apostle John describe this final deliverance? Revelation 19:11-19.

Answer: He describes Jesus coming from heaven to save us from Satan.

Pictured as a mighty conqueror streaming down the corridor of the sky, and as a general leading the armies of heaven, Jesus is revealed as our mighty Deliverer. He is “faithful and true.” He keeps His word. In the last moments of time, He delivers His children. Daniel longed for that ultimate deliverance. He foresaw the day that all evil would be finally destroyed and God’s kingdom would reign forever.

God specializes in the impossible. He delights in deliverance. The same God who promises to deliver this planet from the dominion of evil, promises to deliver you from Satan’s evil clutches today. The same God who will restore this planet to its original purpose, desires to restore your life today. You can praise God today as the mighty Deliverer.