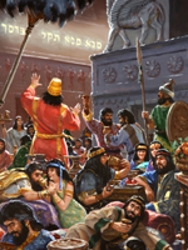 What is life’s greatest mistake? What is life’s most foolish decision? The greatest mistake in life is not to make mistakes—it is to fail to learn from the mistakes we make. Life’s most foolish decision is to ignore the warnings of God. It is to repeatedly violate our conscience, reject God’s counsel, and turn our backs on His instruction. It is to walk away from the opportunities God gives us.

Belshazzar, the grandson of Nebuchadnezzar, had plenty of opportunities to serve God. His own grandfather had committed his life to the true God. The prophet Daniel had lived in Babylon witnessing for truth for seventy years. The light of truth shone upon Belshazzar, but he foolishly rejected it. A day of judgment was approaching much faster than he realized. Belshazzar learned, as we must, that one thing is for certain—there is a day of judgment for us all.

Answer: He describes a great feast given by Belshazzar.

2. How does the apostle James describe the last days of earth? James 5:5.

Answer: He describes people living in pleasure and luxury.

Answer: He characterizes people weighed down with the cares of this life.

Answer: When Belshazzar commanded the temple vessels to be brought for the feast. 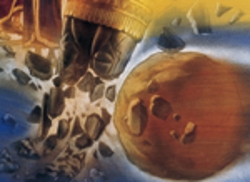 Answer: A hand wrote a message on the wall of the palace.

The king was shocked. His countenance changed. His stomach muscles tightened. He was seized with terror. His entire body shook nervously. His thoughts raced with fear. He knew something had gone terribly wrong, but he wasn’t sure what it was. “What terrible event,” he wondered, “does the writing on the wall foretell?”

6. Who did the king enlist to read the mysterious writing on the wall? Daniel 5:7.

Answer: The astrologers, Chaldeans, and so-called wise men of Babylon.

Belshazzar failed to learn from the past. The so-called wise men of Babylon had failed Nebuchadnezzar, and they would fail him, too.

Some translations say, “Queen-Mother.” Evidently she was not Belshazzar’s wife. She was an older woman—a mother figure in the empire—most likely Nebuchadnezzar’s wife. She knew from personal experience the life-giving power of God. She also knew that God had used Daniel in the past and that He would use him again.

Answer: Aren’t you one of the captives from Judah?

Daniel served as a statesman in Babylon for seventy years. His sterling reputation was well known. His wisdom in political affairs had influenced the nation repeatedly. In view of all this, Belshazzar, in a drunken stupor, attempted to demean Daniel by implying that he was merely an Israelite captive. In a desperate attempt to understand the mysterious writing, Belshazzar offered Daniel lavish rewards if he could explain the significance of these strange words.

Answer: He told Belshazzar to keep his rewards.

Daniel could not be bought! His services were not for sale. His one motive was to serve God. His one ambition was the honor of God’s kingdom. Daniel took this opportunity to review God’s attempts to save Babylon. Throughout Babylon’s history, God gave it repeated opportunities to know His will. In a variety of ways, God knocked on Babylon’s door. Those opportunities were now quickly coming to a close; the door of mercy, open for seventy years, was soon to shut. The Babylonians had hardened their hearts, and there was little God could do except to give them up to their own selfish desires.

Answer: He knew what was right, but he did not follow God’s commands.

Belshazzar knew what was right, but he didn’t do it! He turned his back on the light God gave him. He chose darkness rather than light.

Answer: When we know what is right, but do not do it.

Babylon’s sin was so great because the Babylonians openly rebelled against God when they knew better. Our world today is following the same course.

12. What was the meaning of the mysterious writing on the wall?Daniel 5:25-28

Answer: a. God has numbered your kingdom and finished it. b. You have been weighed in the balances and found wanting. c. Your kingdom has been divided and given to the Medes and Persians.

There is a last night for everyone and everything on earth. There is an invisible line we cannot cross without suffering the consequences. Judgment once again will fall on our society. When the accumulated figures of sin reach a certain amount, God says, “It’s enough.” In the days of Noah, wicked men sealed their destiny. During Sodom and Gomorrah’s time, the accumulated result of sin sealed the city’s doom, and heaven’s fiery judgment fell. So it will be in the last days.

13. How does the last book of the Bible, Revelation, describe the final, irrevocable decision that the entire human race will make one day soon? Revelation 22:11, 12.

Answer: The decision for good or evil is final and the rewards for that decision will be given when Jesus comes again.

Our Lord invites us to come to Him now. The enticing “pleasures” of sin just are not worth it. His arms are open now. His mercy is available now. His grace touches us now. His Spirit is impressing you now. Why not come now? Why make the same tragic mistake of Belshazzar? Don’t delay, give Him your life today!

One day soon there will be a day of reckoning, a day of accountability, a day of earth’s final judgment. Soon every individual will make his or her final decision. The choices you make today are setting your eternal destiny.