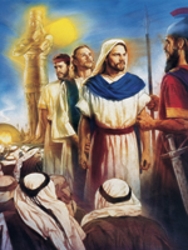 For every Bible truth there is a counterfeit. The devil is determined to deceive God’s people. From the beginning, his work has been one of deception. He is the father of lies (John 8:44). He lied when he deceived Eve in the Garden of Eden (Genesis 3:4), and he has been lying ever since. In contrast, Jesus is the Way, the Truth and the Life (John 14:6). His truth exposes Satan’s lies. Truth is worth living for, and it is worth dying for! Our faithfulness to Christ and His truth will finally determine our eternal destiny.

Today’s lesson reveals the cost three young Hebrews were willing to pay for truth. Rather than accept a counterfeit, disobey God, and fall for Satan’s lies, they placed their lives on the line. Their faith led them to the flames, and it led them through the flames triumphantly. In today’s lesson we will discover how we ourselves can have this death-defying faith in earth’s final hours.

Challenged by the Counterfeit: Questions 1-3

1. In defiance of the true God, what did Nebuchadnezzar build on the plains of Dura in ancient Babylon? Daniel 3:1.

Answer: An image of pure gold.

You will recall in Daniel 2, God gave Nebuchadnezzar, King of Babylon, a dream of the future. In chapter 3, the king builds his own counterfeit image. In opposition to God’s view of the future, Nebuchadnezzar desires to take the future into his own hands. God revealed the future as being dominated by succeeding empires depicted by an image made of gold, silver, brass and iron. But the image Nebuchadnezzar made was all gold, indicating his desire for Babylon to last forever.

2. What command did the king give the representatives from his entire kingdom? Daniel 3:3-5.

Answer: He commanded them all to worship his golden image.

Nebuchadnezzar summoned representatives from his entire kingdom. The decree was universal. The central issue in this growing conflict centers in worship. The counterfeit and the genuine collide. In a moving drama on the plains of Dura, loyalty to the king meets head-on with loyalty to God.

3. What penalty did the king threaten to impose on those who failed to obey his urgent commands? Daniel 3:6.

Answer: They would be thrown into a fiery furnace. 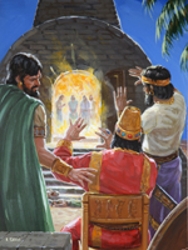 4. What specific commands would the Hebrew youths violate if they bowed down to the image? Exodus 20:3-6.

Answer: The command not to bow to any image or idol.

The book of Revelation describes a decree, which will be passed at the end of time, similar to the decree in Daniel 3. Please read Revelation 13:15-17 and note the similarities between the two edicts.

5. What specific instruction does the apostle Peter give us in Acts 5:29?

Answer: We should obey God rather than man.

According to Romans 13:1, Christians have a responsibility to obey the civil authorities. We should obey the laws of the land. Yet no earthly power has the authority to intervene between the individual conscience and God. The commands of God supersede the human laws of the state. If any state passes laws requiring its citizens to violate God’s law, God’s people are always subject to the higher law of God.

The three Hebrew youths were placed in a trying position. Preserving their loyalty to God meant being disloyal to Nebuchadnezzar.

Commitment at a Cost: Questions 6-8

Answer: They would not worship the golden image.

The response of Shadrach, Meshach, and Abednego was immediate. The King James Version says, “We are not careful to answer thee in this matter, O King” (verse 18). The old English word “careful” means hesitant. They were settled. Procrastination, hesitancy, or delay would have made them vulnerable to Satan’s temptations. The only safe course when faced with temptation is to take a decided stand for right.

Answer: They were cast into the fiery furnace.

They were thrown into the fiery furnace “bound.” Apparently alone, they faced death.

8. As Nebuchadnezzar peered into the flames expecting to see the Hebrews immediately consumed, what surprising question did he ask? Daniel 3:24.

Answer: Didn’t we throw three men into the fiery furnace?

Answer: He saw four men walking in the midst of the fire.

Nebuchadnezzar saw four men loose—not three men bound. Jesus Christ, the Son of God, leaped into the flames and miraculously delivered the Hebrews. The only thing that was consumed were the bonds which bound them. In the trials of life, Jesus is also there. In the heartaches of life, He is there. When we go through the flames, He is there. Here are some marvelous promises of encouragement for our times of trouble.

Answer: The angel of the Lord encamps around those who fear Him, and He delivers them.

Answer: The Son of God.

The “Son of God” is one of the most powerful names of Jesus. It denotes His ability to deliver us in trial. When we go through our darkest times, He is always there. He is the “Son of God;” nevertheless, He became a human being and dwelt in human flesh so He understands our heartaches and longings.

12. What effect did the three Hebrews’ loyalty have upon Nebuchadnezzar? Daniel 3:28.

Answer: He blessed the God of Heaven.

When we make decisions to do right, when we are faithful to God’s Word, when we obey the dictates of a Spirit-inspired conscience, when we follow God totally, our lives will have a powerful influence on others. We, too, will influence them for right!