Lesson 11 – Still in His Hands 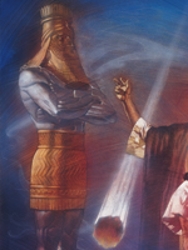 The evening news constantly reminds us that we live in a world that is out of control. Ethnic violence erupts daily, engulfing millions in war. Tribal conflicts shatter the peace in other regions. The age-old hostilities in the Middle East still smolder just beneath the surface. From a human point of view, there is one word which summarizes the future—uncertainty. It’s as if we were on a Boeing 757, uncertain of who the pilot is and where we are going. For tens of thousands, the future is extremely cloudy.

Our chapter today—Daniel 11—repeats the great truths of Daniel 2, 7, 8, and 9. It then enlarges upon these earlier chapters, giving us repeated assurance that God has not abandoned this planet in rebellion. He is still in control. This world is still in His hands. The future is certain. Our destination is sure. Our Pilot is taking us home!

The Purpose of Prophecy: Question 1

1. According to Jesus, what is one of the basic purposes of Bible prophecy? John 14:29.

Answer: To strengthen/insure our faith.

As we see Bible prophecy fulfilled, our confidence in God increases, and our belief in the Bible as God’s Word is strengthened. Fulfilled prophecy is one of God’s ways of reminding us that He is still in control of history.

The Rise and Fall of Empires: Questions 2-6

Answer: a. Persia b. Greece

3. How many famous kings would reign in Persia? Daniel 11:2.

Amazingly enough, there were four extremely important Persian kings during this period of history. Their names were:

4. How does Daniel 11:3 describe the Greek king who would overthrow Medo-Persia?

Answer: A mighty king who will do whatever his will desires.

Alexander the Great, the mighty Grecian king, conquered the world at thirty-two years of age by uniting a relatively small band of Greek patriots. Advancing toward Asia, Alexander’s small army crossed the Hellespont. It was powerful enough to completely conquer the Persian Empire. Yet in the infancy of Alexander’s brilliant military career, he died prematurely at the age of thirty-three. His kingdom, as so aptly described in verse 4, “was broken and divided into the four winds.”

After Alexander’s death, his four generals divided the empire. Cassander, Lysimachus, Seleucus, and Ptolemy ruled in his place. The King of the South—Ptolemy—ruled over the land of Egypt. The Egyptians became extremely powerful. They continually battled with the King of the North—the Roman power.

Augustus Caesar was known as the great raiser of taxes in ancient Rome. It was during the days of Augustus that the decree was passed that all the world should be taxed. Everyone was commanded to return to his own city to be included in the census for tax purposes. Mary and Joseph made the arduous journey of just under one hundred miles from Nazareth to Bethlehem, where the Christ-child was born.

6. After ruling for a short time, Augustus Caesar died. How does Daniel describe the character of the ruler who would follow Augustus? Daniel 11:21.

Answer: As a vile person who would not be given the honor of royalty.

Tiberius Caesar followed Augustus Caesar on the throne. He was one of the vilest rulers ever to ascend the Roman throne. Corruption, bribery, extortion and murder were all part of his political strategy.

The Coming of the Messiah: Questions 7-8

Answer: Prince of the Covenant

Jesus Christ laid down His life to ratify the everlasting covenant with His own shed blood. His blood speaks in eloquent terms that our sins can be forgiven. Through the blood of Christ, we pass from death to life. He died the death that was ours so we could live the life that was His. As an innocent Man, He suffered for us who were guilty. He was righteous; we are unrighteous. He was holy; we are sinful. By faith, we receive His cleansing. Through Him, we become sons and daughters of God. All that He suffered, we should have suffered. Through the blood of the everlasting covenant, we are redeemed from the curse of death (see Hebrews 13:20; Ephesians 2:8; Romans 3:23; 6:23).

Answer: The time of the end.

The prophecies of Daniel graphically describe the rise and fall of empires. Babylon, Medo-Persia, Greece, and Rome rose one after the other. After the demise of the pagan Roman Empire, a church-state union grew out of Rome. During the Middle Ages from 538 to 1798 A.D., the medieval church persecuted those who did not accept its teachings.

The Christ of the Sanctuary: Question 9

Answer: They cast it down and defiled it.

The sanctuary on earth, which Moses built, was a scale model of the great original sanctuary in heaven. The sacrifices of animals pointed forward to the blood-stained sacrifice of Christ. The ministry of the priests represented Jesus, our Representative, our Mediator, in heaven above. The sanctuary in heaven should be the center of our attention. There Jesus, our High Priest, personally applies the benefits of the cross to our case.

“Christ is not entered into the holy places made with hands, which are figures of the true but into heaven itself now to appear in the presence of God for us” (Hebrews 9:24).

In the days of the medieval church, large, pompous, ornate, splendid church buildings with earthly priests and earthly emblems, became substitutes for the true sacrifice of Christ on the cross and His true priesthood in heaven. The sanctuary in heaven is polluted when attention is diverted from it to an earthly imitation.

Answer: They shall fall by the sword and flame, by captivity and plundering.

11. Whose will does this political-religious power seek, and whom does it exalt? Daniel 11:36.

Answer: He seeks his own will and exalts himself.

Answer: That of His Father.

The authentic Christian daily surrenders his will to the will of God. Jesus reigns supreme on the throne of the heart. The heart longing of every real Christian is to discover God’s will and to do it.

The terms, “King of the North,” and, “King of the South,” are symbolic figures in the book of Daniel. We might ask, “North or south of what?” In the Old Testament, Jerusalem was the dwelling place of God. The temple manifested His glorious presence. The terms, “north,” or, “south,” were always in reference to God’s capital city, Jerusalem.

The King of the South represents Egypt. The Egyptians challenged the true God with words of utter defiance—“Who is the Lord?” (Exodus 5:2). In a sense, the term, “King of the South,” represents all such rebellious, defiant, atheistic powers down through the ages. Every earthly political power which has persecuted Christians, avowing secular humanism and atheism, is represented in the symbolism of the King of the South.

In the conflict between the King of the North and the King of the South, false religion and atheism battle for world supremacy. Just before the coming of Jesus, atheism crumbles. Totalitarian governments collapse. Countries once closed to the gospel open rapidly. With the demise of communism and unprecedented openings for the gospel, the prophecy of Daniel 11 is being fulfilled. The next event in the prophecy is the rise of false religion in a great counterfeit religious revival based on human commands rather than God’s Word.

14. When false religion combines with the state in a mighty false religious revival, what will trouble this movement? Daniel 11:44.

Answer: News from the east and the north.

The term, “tidings,” or a message from the East, speaks of deliverance. When Israel was in Babylonian captivity, Cyrus, the king of the east, delivered her. In Revelation 19, Jesus, the King of kings, descends to deliver His children.

15. How does King Jesus describe both the direction and the glory of His return to deliver His children? Matthew 24:27.

Answer: As lightning coming from the east and flashing to the west.

In the final moments of time, the King of the North, symbolizing Satan’s final attempt to unite church and state, attempts to plant His banner, or sign, between the sea (the masses of humanity, see Revelation 17:15) and the glorious Holy Mountain (God’s dwelling place, or church). Just as Nebuchadnezzar counterfeited the image of Daniel 2, compelling the entire kingdom to worship a false god, so a counterfeit political-religious leader in the last days establishes a counterfeit sign in opposition to God’s law. He places human tradition and the commandments of men above the commands of God. Yet his fate is certain. His ultimate destiny is determined. As political leaders before him utterly collapsed, so this religious-political kingdom collapses as well. He “comes to his end and none shall help him” (Daniel 11:45).