Lesson 10 – Without a Doubt 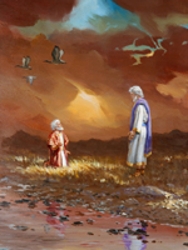 Have you ever wondered why God does not always answer your prayers immediately? Have you ever prayed only to feel that your prayer ascended no higher than the ceiling? Sometimes we have all felt like the proverbial well-digger who seemed to always come up dry.

Our lesson today takes us behind the scenes. It reveals a titanic conflict between good and evil. Although we sincerely seek God for answers to our prayers, there are powerful Satanic forces working in opposition to God. At times, these forces prevent immediate answers. Good and evil angels wage war in the supernatural battle of light and darkness, good and evil, truth and error.

Prayer unleashes God’s power so that He is able to work in our behalf in new ways. Prayer opens new doors of opportunity for God to move. Since He respects our freedom of choice, prayer enables Him to step into our lives. Prayer gives God the permission to do what He was longing to do all the time. Even when we do not see anything significant occurring, God is still at work to solve the problem. When there are apparently no answers, God is still working out a solution. Even though His purposes are opposed, they will never be defeated. Daniel’s experience is “Exhibit A” of a God who is listening. His silence indicates only that He is already at work to solve the problem. When we kneel before His throne, without a doubt, He is listening.

Without a Doubt: Questions 1-4

Answer: A message that was revealed to him.

Daniel was deeply concerned because his people were still in captivity. The Medes and Persians had ascended the throne three years earlier. The prophecy of the Jews’ seventy-year captivity was coming to a close. Daniel was perplexed. When would his people be set free?

Answer: He did not eat any pleasant food or meat, and did not drink any wine. 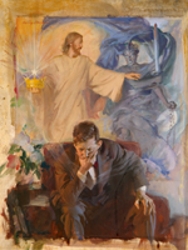 A careful comparison of the descriptions given in these two passages of Scripture identifies the individual pictured in them as the same being. The “man” of dazzling brightness in Daniel 10 is clearly Jesus Christ. Jesus is so concerned about His children that at times He comes Himself to answer their prayers.

4. What happened to Daniel when He experienced the overwhelming presence of Christ? Daniel 10:8, 9.

Answer: He lost all his strength and fell unto a deep sleep.

Daniel could not endure the glorious presence of Christ. He lost his strength and fell into a deep sleep. In mercy, our Lord sent the angel Gabriel to answer Daniel’s prayer.

This expression, “greatly beloved,” is one of the most endearing in all Scripture. God uses it regularly to address His friend Daniel (see Daniel 10:11, 19 and Daniel 9:23). God’s children are greatly beloved of heaven. We are more than skin covering bones. We are much more than enlarged protein molecules—products of blind chance. We are created in the image of God and greatly beloved by our heavenly Father.

Answer: The first day he began to pray.

7. If God heard Daniel’s prayers the first day he prayed, why was there no apparent answer? Daniel 10:13.

Answer: The prince of the kingdom of Persia withstood Gabriel.

When God created Adam and Eve, He gave them dominion over the earth (Genesis 1:26). At the Fall, they lost this dominion. Adam was no longer earth’s prince, and Eve was no longer a princess. They became servants, or slaves, of the one they had obeyed (Romans 6:16). Satan usurped their position. He now became the “prince of this world.” As such, he is referred to as “the prince of the kingdom of Persia.”

Daniel prayed that God would impress the mind of Cyrus to free the captive Israelites. The “prince of Persia,” Satan, imprisoned Cyrus’ mind in darkness. As Daniel prayed, good and evil angels battled for control of the king’s mind for twenty-one days. There are similar battles being waged for the minds of men and women today.

9. Who alone can defeat Satan? Who came to help Gabriel in his struggle against the prince of evil? Daniel 10:13.

There is a great deal of misunderstanding in the Christian world on the identity of Michael. Just who is this Michael? What does His name mean? The name, “Michael,” means, “one who is like God.” Michael is mentioned only five times in the Bible. Besides Daniel 10:13, 21, the other references to Michael are found in:

These verses clearly reveal that Michael is one of the many names of Jesus. Jesus is the Lamb, the Lion, the Rock of Ages, the Lily of the Valley, the Rose of Sharon, the Door, the Way, the Truth and the Life. When Scripture uses the term, “Michael,” to refer to Jesus, it reveals Christ as the “Mighty Conqueror.” Don’t let the expression, “Michael the Archangel,” (Jude 9) confuse you. The word, “archangel,” means the “commander and chief” or the “head” of the angels. Jesus is not an angel. He is the divine Son of God. He never had a beginning and will never have an ending (Revelation 1:8). He is eternal (John 8:58). He participated with His Father in this world’s creation (John 1:1-3). He existed before the angels and created them (Hebrews 1:3, 4).

10. Who will attend Jesus when He returns with the glory of the Father in dazzling brightness? Matthew 16:27.

11. What event occurs when Jesus triumphantly returns in glory? 1 Thessalonians 4:16, 17.

Answer: The dead in Christ will rise and the living will be caught up to meet Jesus.

As the Commander and Chief of the angels, Jesus breaks through the sky with the voice of “the archangel.” The righteous dead are resurrected. The righteous living, along with the righteous dead, are changed into glorious, immortal beings. Together, they ascend into the heavens to meet their triumphant Lord.

No problem is too hard for God. There is no difficulty too great for Him to unravel. There is no heartache too complicated for Him to heal. Today you may be experiencing unusual inner pain. You may be emotionally torn apart. Your life may be devastated. Your wounds may seem incurable. Open your heart to Jesus. Tell Him about all those hurts. He specializes in healing broken hearts. He is a master at building palaces out of the shambles of our lives. Why not bow your head just now and invite Him to be your Healer?