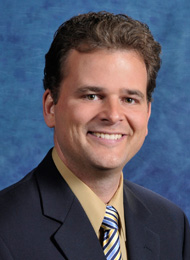 Pastor Shawn Boonstra, a native of British Columbia, was speaker/director for It Is Written International Television in California. Between 2004 and 2010, he appeared weekly on the main It Is Written television program (and podcast).

Boonstra made the decision to commit his life to gospel ministry after attending an It Is Written series in the city of Victoria 17 years ago. Soon after, he graduated with a degree in political science from the University of Victoria, and later attended Andrews University, where he gained theological training.

Before moving to the It Is Written international headquarters in 2004, Boonstra served as associate speaker for the It Is Written telecast in Canada from 1998-2001, then as speaker from 2001-2004. In 2001, he and Pastor Henry Feyerabend held a special “NET” satellite series in downtown Halifax called Revelation Speaks Peace. This event received international attention, and increased the visibility of the telecast in Canada.

Boonstra’s recent satellite events have included Out of Thin Air, The Presence and The Appearing, three short series focusing on the creation/evolution debate, the Sanctuary and the Second Coming, respectively. In addition, he conducted a month-long satellite event from Phoenix in early 2006. More than 1,000 churches hosted this event.

In the last few years, Boonstra has held major series in Portland, Los Angeles, and even the heart of Rome! He has written more than 15 books. His clear grasp of Scripture and his warm, dynamic presentation style have been an inspiration to many. He, his wife Jean, and their two daughters live in Southern California.